Eileen currently lives in Glasgow. She previously worked as a solicitor (for nearly 30 years), mainly in Glasgow Sheriff Court, specialising in Children’s Hearing Referral cases. She was Director of the Diploma in Professional Legal Practice at the University of Glasgow for several years. More recently, she has chaired various professional regulatory Fitness to Practice committees.

Eileen says that part of her motivation for joining the Redress Scotland panel in November 2021 was because she always wondered what happened to the children on whose cases she worked.

“As a solicitor, I was involved in hundreds of cases in which children had experienced serious abuse and trauma. I have often wondered what happened to the children at the centre of the cases in which I was instructed.

“I wanted to become a panel member with Redress Scotland because I understood the types of abuse which children experienced and the effect which it had on their childhoods.

“I felt that working with Redress Scotland would enable me to acknowledge and provide appropriate financial redress to survivors of abuse, many of whom are now elderly and whose lives have been overshadowed by the abuse they experienced as children.

“As panel members, we are very aware of the courage and determination it takes for many survivors to apply to the scheme, as it often involves dredging up memories which they have tried to forget. In addition, by the time an application reaches panel members for consideration, many survivors will have spent significant time and effort collating information to support their application.

“As a panel member, I take my role very seriously and work collaboratively with other panel members to reach a decision which reflects each individual survivor’s unique experience.”

Along with other panel members, Eileen undertook extensive training to join the Redress Scotland Panel. As well as the formal training, she believes that empathy, compassion, common sense, good communication and analytical skills are essential for panel members.

“My values are rooted in fairness and justice, which I believe are reflected in every panel deliberation and determination in which I am involved. My legal background means that I bring analytical skills, of course, but I also hope that my fellow panel members would agree that I also demonstrate compassion and kindness during our discussions.

“I hope that no matter the outcome, that each applicant to Redress Scotland knows that their application has been fully, carefully, and fairly considered by people who truly care about their experiences. I also hope that survivors feel that they have been treated with dignity, respect, and compassion; and that the abuse which they experienced as children has been recognised and acknowledged.” 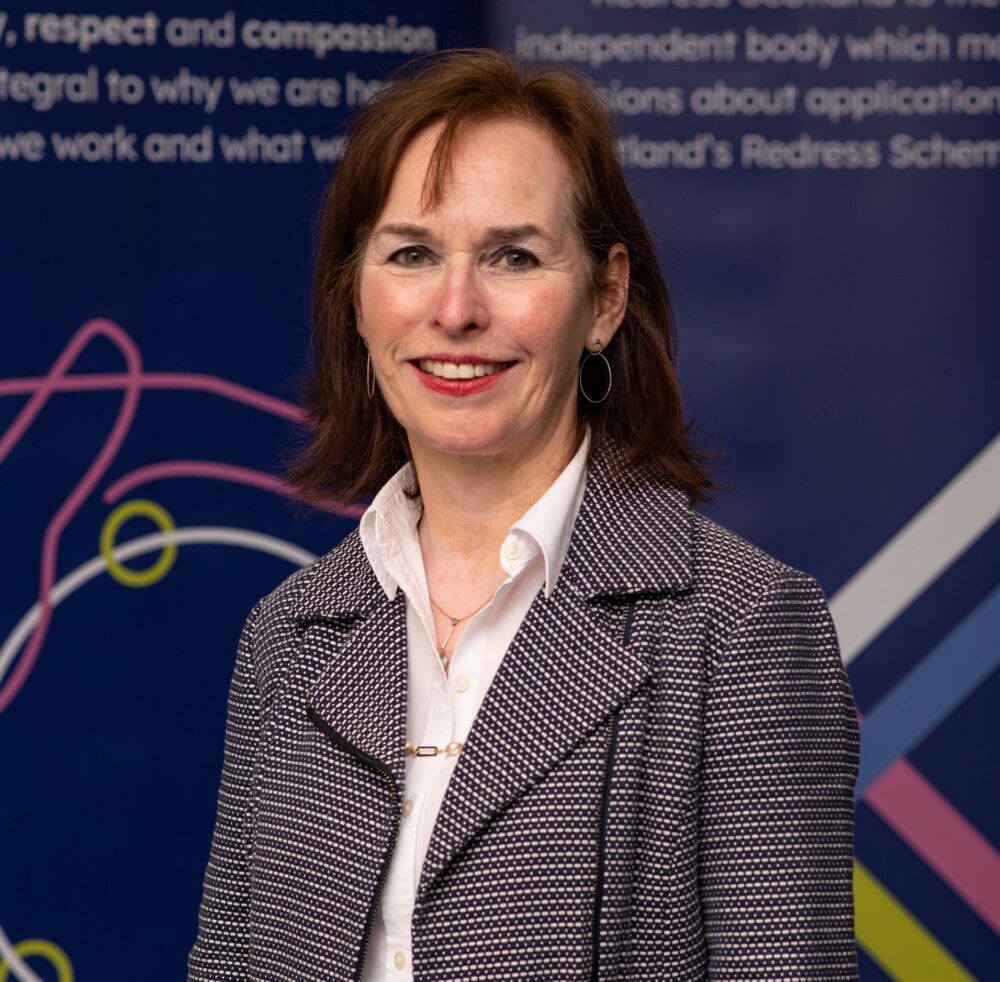 We use cookies on our website to give you the most relevant experience by remembering your preferences and repeat visits. By clicking “Accept All”, you consent to the use of ALL the cookies. However, you may visit "Cookie Settings" to provide a controlled consent.
Cookie SettingsAccept All
Manage consent

This website uses cookies to improve your experience while you navigate through the website. Out of these, the cookies that are categorized as necessary are stored on your browser as they are essential for the working of basic functionalities of the website. We also use third-party cookies that help us analyze and understand how you use this website. These cookies will be stored in your browser only with your consent. You also have the option to opt-out of these cookies. But opting out of some of these cookies may affect your browsing experience.
Necessary Always Enabled
Necessary cookies are absolutely essential for the website to function properly. These cookies ensure basic functionalities and security features of the website, anonymously.
Analytics
We use a third-party service, Google Analytics, to collect information on how you use the site, using cookies and page tagging techniques. The information we – and Google – collect doesn’t identify anyone and is kept for a maximum of 38 months. If we do want to collect personally identifiable information through the site, we will be up front about it.
SAVE & ACCEPT